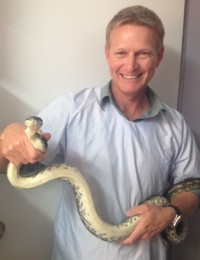 Michael Read graduated from Sydney University in 1990. After a brief stint in Western Australia in a sheep consultancy practice he landed in Wee Waa working with Martyn Powell.

In October 1994, they opened the Narrabri branch & Michael has lived here ever since. Over the years, the large animal workload has changed from predominantly cattle, to now include more horse work. Michael spends a large amount of his time doing equine dental work and eqine reproduction work in the breeding season. He enjoys the challenges of small animal surgery, especially the orthopaedics.

When not looking after animals or doing the dreaded paperwork, Michael can be found chasing after one of his four kids, hiding in his garden or trekking around Kaputar National Park. He has one beloved dog – a Pugalier (Ned).